⚠️ GitHub is beta testing their own Admonition syntax. We should weigh in 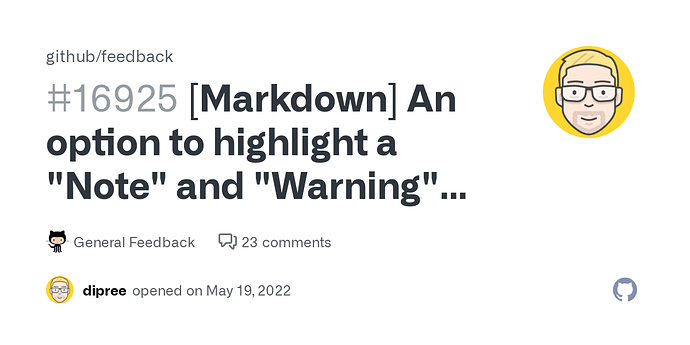 [Markdown] An option to highlight a "Note" and "Warning" using blockquote...

To better highlight and separate certain information from the rest in your documentation on GitHub, we now render a special and accessible note or warning blockquote in Markdown documents. We are u... 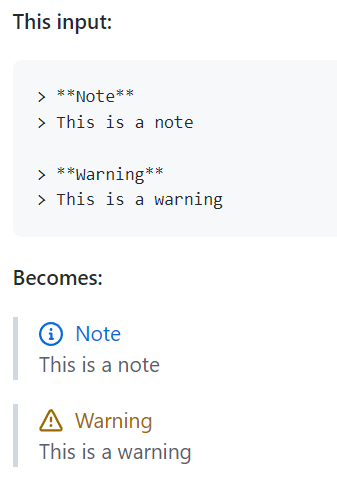 I guess implementations could make it multilingual, so the words Note, Warning etc. could be in any language?

Emojis or abstract symbols like (!) are a better approach to i18n.

It’s worth going back to the core philosophy of Markdown and seeing how well this syntax fits in:

Readability, however, is emphasized above all else. A Markdown-formatted document should be publishable as-is, as plain text, without looking like it’s been marked up with tags or formatting instructions.

The use of strong emphasis may be suitable here, but perhaps the words “Warning” and “Info” should be considered heading text instead? Alternative proposal:

The downside of this is that we have to consider the existing heading level hierarchy. This may be able to be bypassed by using headings within sections, but as Markdown originally did not include sections, that would be a non-trivial change to how rendering works.

Supporting multiple languages would indeed be a challenge. But is this any different from the optional info string used in code blocks (already adopted in the CommonMark spec)? In the case of code blocks, to render them correctly you need an additional library that understands how to render the block nicely for the specified language. 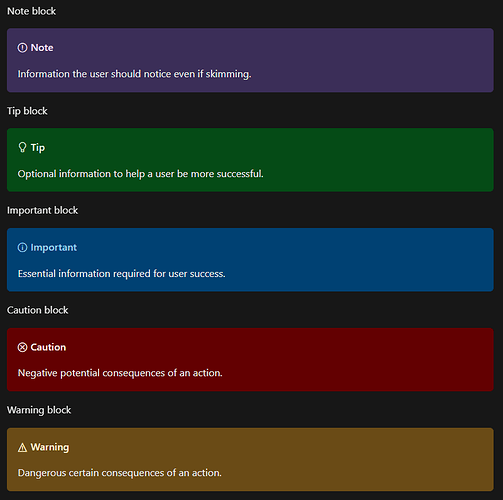 A while ago in McFoggy/commonmark-ext-notifications I used the following syntax:

This syntax was chosen to be simple and self explaining, an exclamation mark character is used to start the admonition block.

Emojis or abstract symbols like (!) are a better approach to i18n.

But are the relevant emoji all available? U+2139 [

I didn’t say all useful emojis already existed or that associations were obvious.

For instance, there may not be a good red cross/saltire for Error/Caution messages:

For the distinction between Warning, Note and Important or Information, there are

Relevant here are the arguments for and against using the Unicode bullet character:

Thanks to unicode, we can write the following bulleted list in plain text, without the translation to HTML • Hello • World! Again, what you see above is NOT the following code, but plain text: <ul> <li>Hello</li> <li>World!</li> </ul> If you forget to add two trailing spaces after “Hello”, the markdown would convert it to <p>• Hello • World!</p> and the browser would render that all in one line, which would look like: • Hello• World! This is obviously worsening the original text. T…

If the arguments for only using plain ascii characters easily typed on a physical keyboard are strong they’ll apply here too.

If the arguments for only using plain ascii characters easily typed on a physical keyboard are strong they’ll apply here too.

As I wrote on the GitHub.com discussion:

It’s time to move beyond ASCII and English

I think ASCII should no longer have the special status that it has had:

At the very least english words or words of any language should not become part of the grammar/syntax. If we must stick to ASCII, then "abstract symbols like (!)" as @Crissov suggests would be better.

And for graceful degradation, as well as for the semantics, I think using ATX headings make a lot of sense, as you brought up before. Here is the same example from the GitHub.com discussion, but using ASCII instead:

will render under legacy Markdown/CommonMark as:

and under tools that recognize the admonition syntax as an HTML div with an admonition class.

The downside of this is that we have to consider the existing heading level hierarchy. This may be able to be bypassed by using headings within sections, but as Markdown originally did not include sections, that would be a non-trivial change to how rendering works.

A block quote represents a sectioning root. This is true in HTML. I think it is implied in Markdown because of the semantics of a block quote: content from elsewhere. Thus the headings in a block quote are in a separate scope from the content that it is embedded within. You’ll never see headings within a block quote appear within the table of contents, for example.

@jgm What is your opinion on all this? It matters much as I think the GitHub folks will listen to you far more than they will to us. They are barreling ahead with what will become a de facto Markdown standard given their reach and power.

This is IMHO the most straigtforward approach. It even works without any plugin.