Looks like the consensus is just to stick with A (without the !). Will ensure that GitHub aligns with that as we introduce mermaidjs support.

I was thinking that the !language approach helps differentiate between block rendering/execution vs straight syntax highlighting and would also have the advantage of not adjusting any existing examples of folks inlining mermaid code examples, but folks today don’t do !mermaid for those examples, they do javascript. Similarly even things like inline SVG would be xml in syntax highlighting terms.

Let’s kick off a separate thread for math?

I agree it is kind odd to be forced to do:

That said, I get @vitaly’s argument here that we would be hurting readability for an edge case here.

What about attributes? I am not sure we are aligned as an industry, but I think maybe GitHub should support something like this: (there is a forest theme here: https://github.com/mermaid-js/mermaid/tree/master/src/themes)

We have theoretical support for that scheme at Discourse now, just need to implement the component.

Under CommonMark this would display the source code of a Mermaid diagram if no extensions are applied. I do not think it should render the output of that code as this behaviour would be inconsistent from the behaviour of other code blocks with syntax highlighting. If the behaviour is inconsistent between different types of code blocks it doesn’t follow the principle of least surprise.

CommonMark renders to an HTML <code> element. The HTML Standard’s definition is “The code element represents a fragment of computer code.”

If we need to render the output of source code with a CommonMark document, perhaps it would be better to go with a dedicated syntax?

What about attributes? I am not sure we are aligned as an industry, but I think maybe GitHub should support something like this: (there is a forest theme here: https://github.com/mermaid-js/mermaid/tree/master/src/themes)

I have no personal preference about attrs format, and dont’ know reasons why something should be prefered/avoided.

If we need to render the output of source code with a CommonMark document, perhaps it would be better to go with a dedicated syntax?

I this case, following this logic, we will need new syntax for EVERY new block renderer. That’s overkill.

May be, i could agree, using fenced syntax to wrap things with nested md markup like quotes may be unusual, but i see no problem with code-like blocks, as mermaid.

Also, spec (markdown) is for humans, not humans for spec. We should not push users follow blind with abstract rules, if result does not looks “natural”.

Let’s kick off a separate thread for math?

Let’s be realistic - doing nothing will cause waste of several years more. I’d be happy if process of math markup stabilization can move forward.

One more possibility - tag name can be more descriptive:

I’m not sure how nice and good is that. Just sharing idea.

Yes it’s too far late to dictate a rule that says a fenced code block without some new signifier must only render as source. And adding modifiers to the first info string token such as !mermaid will break too many things as well.

The simplest most backward compatible solution would be to establish a standard around an optional second token of the info string that, if used, makes explicit whether the code block should be rendered as source code or “executed”. It could work like this:

The only case where backward compatibility might be lost is when all of the following are true:

I think this will be rather rare and mostly limited to power users, who will figure it out and update their software or demand that it gets updated.

The other proposals mod the first token. They won’t degrade gracefully.

Yes it’s too far late to dictate a rule that says a fenced code block by default renders the source. And adding modifiers to the first info string token such as !mermaid will break too many things as well.

IMO, the only possible breakage is collision with language name for highlight, but i don’t know any examples from real world. In worst case, this can be solved by human-friendly tag name & recommendation how to create those.

That similar to !, but more clear for human & still easy to type.

Alternative is to just use mermade and add mermade-code for crazy case, if anyone really wish to show source with highlight.

I mean there is already much extant content that expects the following to result in rendered mermaid diagrams:

All I’m saying is that it’s too late to dictate that the above should always be rendered as source code.

How do you like my updated syntax for execution (mermaid ())?

I clarified the sentence you quoted.

Ah, no problem then. IMO, fenced blocks have bigger potential, than initially expected and declared in spec. It should not be a principal problem to clarify.

But as i said, we should unblock syntax extension process from main spec. To be able add new things in parallel, but still with reasonable guarantees of compatibility. And that requires more active participation of Github. At least, with “official” confirmation of acceptance.

Probably, @martinwoodward could give some light about what we could expect.

I this case, following this logic, we will need new syntax for EVERY new block renderer. That’s overkill.

In the case of Mermaid, there are two primary ways of viewing the block: as source or as the rendered output.

In practice if there are differences with how the block is rendered in different implementations, that rendering is not going to be portable. This could change the meaning of the document between implementations.

In the case of a Mermaid diagram, for implementations that only render the output, it will become impossible for others to extend/change the diagram without access to the source Markdown file (or rewriting the diagram). This may not have been the intent of the original author, for example if they intended to demonstrate how to write the source Mermaid syntax to the reader.

So that’s why I think we need to a seperate, explicit syntax to differentiate between the two conceptually seperate approaches to displaying Mermaid. That could be extending the fenced code block with a flag or a new syntax.

IMO, when we speak about usage, every use case is not just presentation, but pair of [presentation, usage frequency]. That help to understand the real needs, because rare case should not “poison” major cases.

All have 2 labels (one for diagram, one for source).

All have 2 labels (one for diagram, one for source).

You forgot my proposal

Also, if someone has a lot of documents with “old” notation of anything, those can be mass-updated with some convertor tool.

Why not reuse existing syntax:

which could be understood as embedding an image from an inline URL.

Why not reuse existing syntax:

which could be understood as embedding an image from an inline URL.

It goes against Markdown’s philosophy.

I’m a bit late to the party here: I had thought this just had to do with mermaid, which I don’t really care about, but it actually has implications far beyond that, so I do have something to say.

I think it’s always very useful to try to keep in mind prior art and not reinvent the wheel in 17 different ways. Pandoc and a number of other implementations have long supported attributes in braces: e.g.,

And no, pandoc didn’t invent this syntax; it was already prior art more than a decade ago (e.g. from PHP Markdown Extra). A bare word is allowed when it’s just a class and there are no other attributes:

The braces make it extremely clear that this material is not part of the text, but more like metadata. They also help reduce the ambiguities between fenced code and hard-wrapped inline code. After all, inline code is allowed to start with three backticks, and might contain text like mermaid theme=forest.

I think it’s always very useful to try to keep in mind prior art and not reinvent the wheel in 17 different ways.

Prior art is very important for initial investigation. But that’s not the only criteria to check. The second criteria is convenience. And, important factor is usage frequiency. Also, PHP Markdown extra is not defacto standard. So, it can be refered as prior art, but not as “trusted authority”.

The most frequent use cases - blocks. IMO {.mermaid theme=forest} is overcomplicated there (braces, dot). IMO this looks like reinventing html.

The braces make it extremely clear that this material is not part of the text, but more like metadata.

For blocks, backtics ``` signal about metadata very well. “unneeded” braces enforce this too mush an looks like programming or something alien

They also help reduce the ambiguities between fenced code and hard-wrapped inline code.

I think, this is important wish at start. Ideally, we like to have this in the end. But inlines are used much more rare than blocks. And making blocks “ugly” in favor of rare feature may be not optimal.

I use standard approach, when problem has no good universal solution at start - split to parts, try to resolve each & join back. Then iterate again and again, until satisfied.

IMO your arguments do not take into account “usage frequency” & “use case coverage”. Every rule has eхclusions, but if we consider exclusions without appropriate weight, that’s a direct way to destroy any logic (or get overcomplicated result).

I agree that curly braces are looking too technical. With tilde fences ~~~, there is also no ambiguity with inline code spans.

Meanwhile, Github has started advertising its Mermaid support in GFM without any special marker like !: 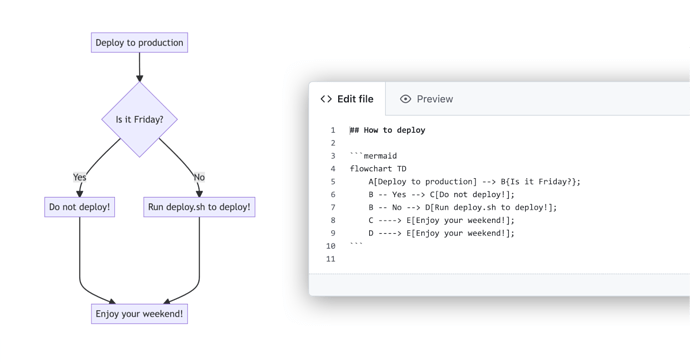 Include diagrams in your Markdown files with Mermaid | The GitHub Blog

Mermaid is a JavaScript based diagramming and charting tool that takes Markdown-inspired text definitions and creates diagrams dynamically in the browser.